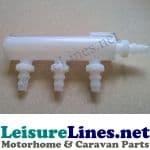 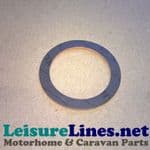 EXHAUST END FINISHERS Keeps your motorhome cleaner from exhaust soot deposits. While displaying a smart appearance to exhaust end. The finisher have been specially developed to direct exhaust exit down through base of finisher, while appearing to leave a normal round end to the exhaust. As no exhaust gases leave through this end it remains clean of black deposits, and so do your sidewalls. Gloss chrome finish adds to appearance, new aluminised finish will keep appearance longer than chrome plated (more corrosion-proof). L= length of finisher, ID= internal diameter, OD= outside diameter. All sizes mm. Boxer/Ducato/Relay 1994-2002 EXH100D70, EXH280D70, EXH284D70, EXH285D70. Boxer/Ducato/Relay 2002-on With rim cut off EXH101D70, EXH281D70. Ducato 14 2002 ON Without rim cut off EXH282D76. Ducato 18 2002 ON Without rim cut off EXH283D79. Daily, Sprinter/VW LT 97 on With rim cut off EXH100D70, EXH280D70, EXH284D70, EXH285D70.

Customer Reviews
Write an online review and share your thoughts with other shoppers!

We carry extensive stocks of spare parts from all the leading brands and numerous other essential spares.
If the part you require is not in our usual stock we can generally obtain the part in reasonable time.

If its a rare or obsolete Thetford part we have a wide range of these items and can usually find the part from other sources if not in our extensive stock.
If you are planning or are in conversion and construction of a self build campervan, we can help you with most of the components you could want to achieve your intended camper design.
01926 854271

Mon to Thur 9am - 4pm
Friday 9am - 3.30pm
You will find a significant part of the LeisureLines.net product range displayed on our regular stand at the NEC Birmingham.

Come and chat with us and find the right products to achieve your desired project.
See You There!
All pictures, diagrams, images and dimensions are non contractual E& O E